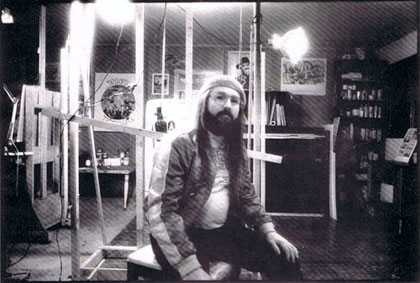 Pat Ryan was born in New Rochelle, New York in 1941 and raised in Levittown on Long Island, eventually migrating to Los Angeles in 1962, where he attended Art Center School of Design. He worked for various advertising agencies on Sunset Boulevard as a young art director. But when the Vietnam War loomed large, Pat turned on, tuned in, and dropped out. In 1971 he packed up his belongings and young family, soul singer wife Cyretta, their four young children, two cats and a dog, and moved to the small town of Fairfax in Marin County, California, just north of San Francisco. He first opened up a tiny studio in the stairwell of Litho-Color Graphics, a printing shop on Bolinas Road in Fairfax. Tiny – it was 64” wide and about 10 feet deep! He discovered three local art supply shops within walking distance of his studio, and loved the sleepy atmosphere of the town.

Eventually, he met and befriended many of the local poster and T-shirt artists, and together they rented a building on the corner of 2nd and B Streets in San Rafael. Collectively known as the “Peanut Gallery,” Pat shared the building with the greatest California rock poster artists; Alton Kelley, Stanley ‘Mouse’ Miller, Victor Moscoso, Larry Noggle, Linda Miller, Tim Harris, Enid Hansen, and Dave Sheridan. They mingled, collaborated and got turned on to each others’ medium and style. During this time, Pat Ryan painted most of the Concrete Foundation of Fine Art (C.F.F.A.) poster, which can be seen in an historical context in Paul Grushkin’s book, “The Art of Rock.”

It was also here in the Peanut Gallery that Pat painted a series of 12 designs known as the Wounded Knee Memorial Series, depicting native American tribes. In 1979 the Peanut Gallery disbanded, and the denizens threw a final monster party, each artist having created a T-Shirt design to help fund their move into their own separate studios.

“When I first arrived in the Bay Area in 1971, that was about the time the Indians had taken over Alcatraz and I met a lot of people in the movement who were very active politically. It’s the kind 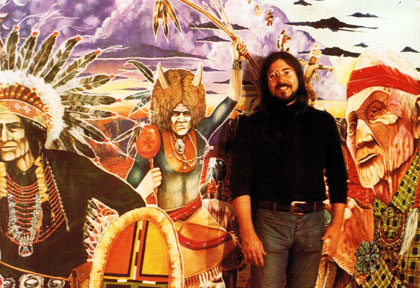 of thing you can give lots of support to, but the situation’s never going to change. It’s a very sad part of our history, very, very sad. I’ve always had empathy for the native cause. As a kid I’d go to the movies and root for the Indians, always. I was really into the Native American culture, making bows and arrows, tents and teepees. My first paintings of American Indians were made when I was about eight. I remember one that I did of an Indian brave with a knife in his hand, confronting a charging mountain lion. As I grew up, I did a lot of reading and researching, and came to have a new-found respect for the native tribal cultures I encountered. “However, the cultures have been totally mixed up in the larger American ‘culture,’ so the things that I did artistically never got off the ground. I really wanted to get some Native American support and donate something from my Wounded Knee Memorial T-shirt Series to a Native American museum. But it never happened. Perhaps in the future…..”

“I also did a mural on canvas in 1974 that is 7’ high and 16 1/2’ wide, which I still have rolled up and stored in my studio. It was of some Navajo Indians in Monument Valley making turquoise jewelry. There’s this old man, a wise elder, having some vision of all the dancers from history coming out of the clouds. It’s a really cool piece, and it got me started painting again. Before that, I’d been doing graphics, underground comics, and that kind of thing. I worked on Hit the Road, a hitchhiking comic, and Yellow Dog Comix, plus ‘The Leather Nun’ with Dave Sheridan. When I started the mural in 1974, it changed my life totally. I did this mural in two months, then started working on the Wounded Knee Memorial series doing T-shirt designs and just couldn’t stop. The last thing that I did was a big round Mandala; it took three years to complete.”

The Fairfax Years and Artista Gang 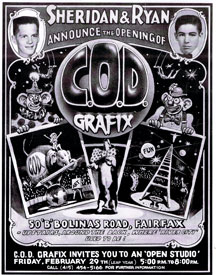 At C.O.D, Pat Ryan and Dave Sheridan began their several years of close friendship and collaboration. Their studio was the entire upper floor of a commercial building at 50B Bolinas Road in downtown Fairfax, with a fabric store and art supply store downstairs, and a new age music venue and restaurant next door. They upgraded the main room with a discarded piece of carpet, and papered the walls with their artwork as it was produced over the years. During this time, Pat and Dave, with a little help from Kelley, painted the ARTISTA rainbow dragon squeezed from a paint tube. This was the birth of the ARTISTA ART GANG, eventually numbering over 700 members. Almost in synch with the ARTISTA arrival, Pat Ryan and Dave Sheridan created the fictitious California Homegrowers Association. In the wild 80’s, Pat Ryan and Dave Sheridan collaborated on the first pot brand labels and postcards in the California orange crate art style.

High Times featured a small article on them during this period. “In 1980 Dave Sheridan and I started C.O.D. Grafix in Fairfax,” said Ryan. “This is where we did ARTISTA and 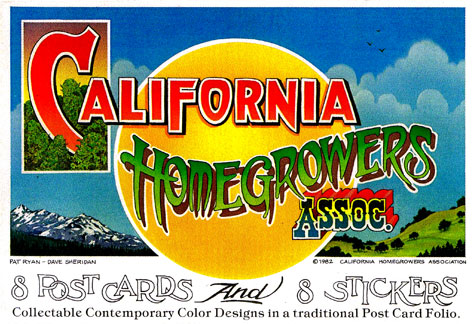 California Homegrowers Association. ARTISTA used to send out postcards when we did shows and parties.. It was just a joke, you know, we all wore these black satin jackets with ARTISTA embroidered on the back and we’d go to car shows and see real gangs and run away. They’d look at us and think what kind of wimps are you? Artists as a gang? It was fun, but then it turned into something that got out of hand. We started having these parties that got bigger and the mailing lists got bigger and bigger and people who were in ARTISTA started getting delusions of grandeur. “We never intended for it to become like that,” said Pat.” To us it was a joke, you know, it was like the only rule about ARTISTA is that there were no rules. It was wide open, but that was before people started considering copyrights and lawyers and stuff, so it just kind of faded away. 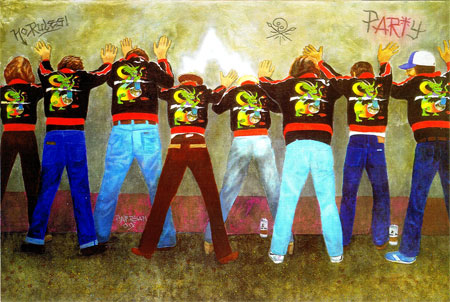 Kelley and I were the last two guys; it wasn’t meant to continue on forever. We had a softball team that I designed all the T-shirts for, we had the coolest uniforms. Originally we did it just for fun, you know, going out running around the bases, drinking beer and smoking pot and so on. But suddenly, we became the champions of the league and it got too serious. We recruited ladies from the women’s softball league who were ringers, so all our women were probably better than our men. It was hard just to have fun, because once people get that involved, they want to take it to the next level. When it gets too serious, I drop out.” In the meantime, the ARTISTA gang grew and the annual parties became events not to be missed. Sadly, Dave Sheridan died in the early 80’s, a victim of cancer. Pat Ryan carried on in Sheridan’s absence, surrounded by family, friends and a colony of artists and their families that the ARTISTA had evolved into.

As his artistic prowess and reputation grew, Pat got into trying his hand at making humorous videos with fellow artists that were hanging around the Fairfax studio. This was the beginning of Tacky Productions. This was in the analog days, with no technology except a hand-held camcorder with no editing capabilities. They were tacky – the name says it all. It was a fun-filled time making extremely low budget videos with his pals Vidall Angel, George Melchior, Sean O’Connell, Steve Horgan (he had the camera) and anybody else who would stop by the studio. Pat was also working on long term projects, creating yearly calendars for Prairie Sun Recordings Studio and the art for the annual Cotati Accordion Festival poster, which he still does to this day. Pat continued working on this series through the 80’s and 90’s when, in ’92 he found himself drawn to leave Fairfax. With their kids grown and married, he and his wife settled in Redway, CA, where he knew some fellow ARTISTAs. Redway was right in the geographic heart of Northern California’s Emerald Triangle.

“I left Marin County in 1992,” said Pat in an interview with High Times in 2004. “A friend and I used to go to Reggae on the River every year and we’d end up with a whole entourage of people, all from Marin County. All our friends and their kids would show up, it was like our own little city. It went on for 10 or 12 years in a row. When we stopped going to Reggae on the River (because of the cost increase), we had our own party at our house in Redway. We had a flat bed truck, and set up speakers. All of our kids are musicians, so they came and played. We had people from Reggae on the River coming because they had to drive by our house anyway, so all these Rastas showed up and we had our own little jam at home and it was great.” Needless to say, being in one of the prime growing areas of the world, Pat spun his talents into creating new, vibrant and hilarious herb labels. He also became the defacto poster artist in residence for Reggae on the River, Sierra Nevada World Music Festivals and the Mateel Community Center’s never ending array of cool world beat and reggae shows. Over the next seven years, Pat did over 50 music posters for the Mateel Community Center, and witnessed some incredible shows. In 1999 Pat and Cyretta moved back to the Bay Area so they could be closer to their 5 grandchildren. They still wanted to be in a “country” environment, so they settled in the Sonoma Valley in the picturesque, woodsy town of Glen Ellen in the wine country. Here Pat worked out of his home producing posters and t-shirts for festivals and concerts and did several jobs for clients like Grateful Dead Merchandising, Phil Lesh & Friends, and the Doobie Brothers. He produced several custom designs for wine labels for local wineries, (links to wine labels) and came out with his own line of greeting cards called “High Again,” based on t-shirt designs he did while living in Humboldt County.

Pat has created well over 100 posters for various musical venues and festivals throughout his career. He has exhibited his poster art at local wineries and galleries and is part of a group of exhibiting artists at T.R.P.S. (The Rock Poster Society) poster shows. In fact, his work can always be seen at the T.R.P.S. Annual Springtime Show at Fort Mason in San Francisco, and in the fall at the Hall of Flowers in Golden Gate Park. The next one will be October 10, 2009.

Pat now lives in Rohnert Park, in Sonoma County, and is working on another in his series of Indian paintings. He has several patrons who believe in his work, and have helped him with funding over the years to continue his dream. He may be reached at (707) 665-9390. He does have an email address now, as of October 2, 2009.

He is still an analog artist, but has joined the digital age. If you have questions about upcoming events, please conatct Pat for more information.

Vidall Angel and the Angel Family

Rhody Ringrose Notes: Excerpts taken from article by Chris Ducey and an interview with Pat Ryan in Cannabis Health Journal